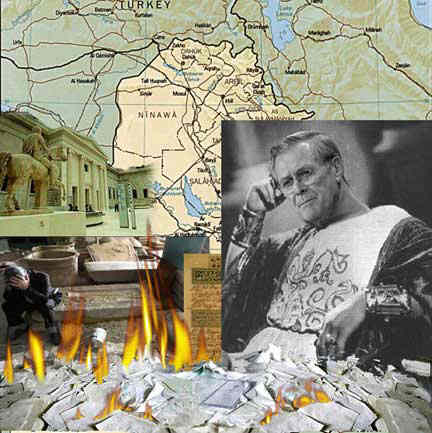 The clock was striking 13 as I passed the Ministry of Truth on my way to the office, thinking about Uncle Frank’s recent profane tirades unbecoming a librarian of genteel tastes. It’s disturbing, especially in public. People stare, and cover their ears, and move away with their lips curled and their noses wrinkled. What can I say?

Not being a librarian of genteel tastes, I have no idea. I drove into work today with a home-made tape blasting the Ramones (Rocket to Russia) and the Sex Pistols (Never Mind the Bollocks) on the A side, and John Coltrane (A Love Supreme) on the B side. By the time I got out of the car, I felt ready for almost anything, as long as it came with a good bass part. It could be the late Dee Dee Ramone’s machine-gun attack, or Jimmy Garrison backing Coltrane. Don’t matter to me none, as they say in Flint.

I’m not sure, however, if anything can prepare me for the daily deluge of dreck on “the news.” If you believe “the news” from our glorious mass media, the U.S. attack on Iraq really didn’t trash large chunks of that happy nation’s cultural infrastructure. Sure, a handful of artifacts went AWOL from the museums, but most of them will turn up on e-Bay, and no doubt those who buy them will return them to the people of Iraq as a public service. And anyhow, you had to laugh when Rumsfeld made that hilarious joke about how if you’ve seen one old pot, you’ve seen ‘em all. What a card!

Getting Past the Smokescreen

On the other hand, if you take the trouble to work past the Casa Blanca’s PR smokescreen, and the mass media’s lazy reporting, you might learn that the bombing and bashing and the blood-dimmed tide of anarchy we unleashed in Iraq did, in fact, do a spot of bother on the Iraqi people’s cultural assets.

A report from the International Federation of Library Associations and Institutions dated May 1 notes substantial damage to Iraq’s libraries: the National Library looted and burned; the National Archives looted and burned; the Al-Awqaf Library at the Ministry of Religious Affairs, also L & B;  the Central Library at the University of Baghdad, with a collection of some 600,000 items, burned; the Library of Bayt al-Hikma, a center for social science research, completely destroyed; the Central Library of Mosul, with a collection approaching a million items, looted & burned; and so on. See for yourself at:

Nabil Al-Tikrite has posted a lengthy and detailed situation report on “Iraq Manuscript Collections, Archives & Libraries” that reinforces and amplifies the information in the above document. See it at:

But It Coulda Been Worse!

According to credible accounts, then, grave damage has been done to Iraq’s libraries, but librarians, archivists, and kindred spirits everywhere can be proud of their colleagues and sympathizers in Iraq. Without their diligent work to protect library collections, the situation would likely have been much worse. The Boston Globe reported on May 13 (“Rebuilding Iraq; Library’s Volumes Safely Hidden”) that bibliographic rescue workers may, before the trashing of the National Library, have tucked away as much as 90 percent of the library’s holdings, both off-site and within the facility itself. Globe writer Patrick Healy quotes one National Library guard who said he watched over the library with pride.

“I know the value of books, that’s why I’m protecting them,” he said. “They are beyond value. Priceless.”

As priceless as Donald Rumsfeld’s jokes about museum artifacts. How is it that a humble Iraqi guard demonstrates a more enlightened attitude toward cultural treasures than does the U.S. secretary of defense? One would think…

Something About a Rat’s Ass

“Goddamn right I do! I mean, hell’s belles, did it ever occur to you that these guys simply do not give a rat’s ass about books or libraries or museum collections or any of that kultural krap? When do you think Field Marshal Rumsfeld last read a book? Huh? What do you think, he spends his free time with the short stories of Nathaniel Hawthorne? You think maybe he’s pondering the deep meanings of “The Minister’s Black Veil”? You think he’s outlining his vacation plans for studying the Egyptian sculpture at the Art Institute of Chicago? He doesn’t care! None of them do! It doesn’t mean squat to them!”

That is, I am afraid, probably true. Karl Rove is no doubt studying the films of Leni Riefenstahl for ideas on presenting Boy George in heroic campaign video, but aside from such practical applications, their grasp of the meaning of art is a little limited.

“And you librarians, you tend your tidy desks and charge out books, and answer questions, and have reading hour for the kiddies, and study contracts with online vendors, and fantasize about getting your grinning mugs on the cover of Library Journal, and go about your business as though everything is what it was, when the truth is that… that…”

“The truth is that the fascist bastards are planning to pull down the foundations of the life that you lead. They aim to destroy it. You think they have no respect for foreign cultures? Hell, Boy, they have no respect for their own! Do you think it’s simply an odd happenstance that in a country governed by enemies of public schools, we see public schools so short of money they have to close before the normal end of the school year? This while that sanctimonious twit in the White House prattles about ‘leaving no child behind’? Give me a break!”

Well, there may be some connection there, but it really owes more to the vagueness of the economy…

“Shit fire! That’s what a Southern boy I used to work with said when things went really wrong, and he must be saying it a lot, these days. Ain’t nothin’ vague about it, Jack! It’s intentional! They want the public schools to fail! They want to destroy Social Security and Medicare and Medicaid. And you know why? Because all those entities are contrary to their insane faith in… in faith! Faith in their precious Lord and Savior Jesus H. Christ and His eternal endorsement of free-market capitalism! These people are just plain nuts! They are out of their tiny little minds!”

I look around to see if anyone is listening. This is getting a little embarrassing.

“I’m trying to be calm,” he says. “Look. The only things these people have that pass for ideas are praying to Jesus—they all fancy themselves upstanding Christians; look at that pious show Bush puts on, praying in public with his little weasel eyes squeezed shut, like God’s gonna whack him if he peeks—cutting taxes, and going to war. That’s it. Oh, yeah, and making sure that all women get pregnant and have babies, whether they want them or not, or can afford to feed them or clothe them after the fact. Jesus, taxes, war, and babies, in a tasty capitalist growth medium.”

“I’ll tell you what, man, if Jesus came to Washington, some of these sanctimonious ‘Christians’ would find their sorry asses kicked into the Potomac. What are there, maybe three Christians in the United States? One in Kentucky, one in North Dakota, and two in Oregon. OK, that’s four. Four, then. That’s gotta be about it. All right. I’m done. I’m outta here.”

And not a minute too soon, I’m afraid.