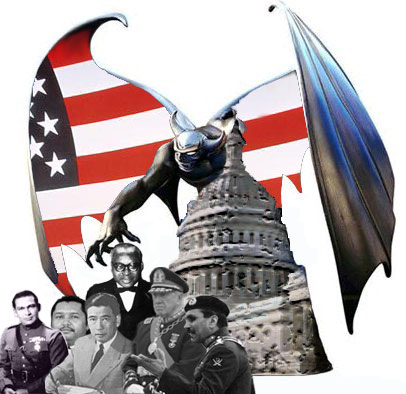 And Oil Has Nothing to Do with It

On toppled statues of Saddam Hussein, happy Iraqis deliver the ultimate local insult as they beat on the face of Saddam’s graven image with the soles of their shoes. How can one not feel good for people who have escaped the bondage of a thug?

Even if one doubts, as I do, that a desire to liberate Iraq played any real part in the motivations of the Bush Gang’s invasion. Considering the willingness of a long line of U.S. administrations to countenance the inhumanity of dictators around the world, provided the creeps kowtowed to American interests of the moment, the yapping about “liberation” that we hear from the administration and from the pimps for war in the media is unconvincing. Whatever liberation flows from this adventure is strictly of the epiphenomenal sort: It is the smoke, not the fire.

In Bed with the Evil Ones

If we found freedom of the oppressed our guiding light, why did we, in years past, provide aid and comfort to such masters of oppression as Fulgencio Batista (Cuba); the Somozas (Nicaragua); the Duvaliers (Haiti); Pinochet (Chile); Ngo Dinh Diem (South Vietnam); Mohammed Zia Ul-Haq (Pakistan); and so on? Murderers, torturers, thieves, drug runners, the U.S. has been in bed with all of them, willingly.

The pious pap about liberation erects a false front for the masses’ disorientation. It helps assuage the consciences of those who confuse “reality” with Survivorand its ilk, and who think they’re seeing “the news” when they watch the Fox network. It helps convince them that their or their neighbors’ or their friends’ sons and daughters in the military died in a noble cause, rather than to help the con artists and warmongers who populate the Bush Administration pursue a political agenda hostile to the most fundamental tenets of democracy, inimical to the best traditions of American life, and that further diminish American security in a world alive with people who hate and fear us. (Gee, I wonder why?)

It helps convince them that killing thousands of Iraqis—most of whom were themselves helpless victims of Saddam Hussein and his goons—can be excused by some greater good of freedom won for the survivors. It helps persuade them to accept the Bush Gang’s big lie that diplomacy could not have worked, that time had run out, that U.S. patience was very reasonably at an end—when, in fact, the Bush machine clearly never intended any route but war to obtain what it wanted in Iraq. What it wanted, aside from assured access to the oil (would this invasion have taken place if Iraq’s chief export were peanut oil rather than petroleum?), was to put in place a government that would bend to American interests.

I’m sorry: to the interests of a small minority of Americans.

As history has shown, however, the bigger the lie, the more ready the eager crowds are to believe it. Despite the child’s assurances, a mother won’t believe that her adolescent daughter has cleaned up the mess in her room, but she’ll believe that a U.S. invasion of Iraq—a country that never threatened this nation—has nothing to do with either oil or George W. Bush’s messianic conceit. Go figure, eh?

Escaping the World in War

One source that can help the figuring is a recent book, War Is a Force That Gives Us Meaning (PublicAffairs, 2002; $23; ISBN 1586480499), by the veteran war correspondent Chris Hedges. Hedges draws on his direct experience in contemporary war zones to base his observations on the role of the media in war (they sell out); on the way the public—that’s us—finds heightened purpose in the focus and camaraderie of war, as opposed to the dreary banality of daily life; on the addiction to war so common among its correspondents; and on the nationalist mythology that plays such a significant role in international conflict.

I question Hedges in some places, and his concluding remarks on dealing with the problem of war may be tied too closely to his own experience to achieve the universality at which he aims. Nevertheless, his book leaves a lingering undertow of ideas, many of them very troubling. I finished it shortly after the Iraq invasion began, and found its brooding presence intruding in my mind again and again as I watched and read coverage of the carnage.

A piece from Hedges, “The Press and the Myths of War,” is one of the highlights of the April 21 issue of The Nation; it comes partly from the book, and partly from Hedges’ response to the invasion. Reading it will provide some of the sense of the book—but it is not a substitute for it. You can go to the essay (while the link works) at:

A paperback edition of the book is apparently imminent, if you want to save a few bucks by waiting.