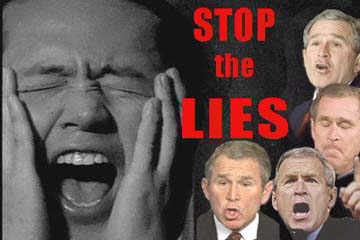 When I enter my office in the morning, the first thing I do is to look at the telephone to see if the voicemail indicator light is blinking. It has been blinking a lot, lately, and most of the time the message—delivered in a gasping, wheezing voice—is from a reference librarian calling in sick. The flu bugs are goin’ around, and we’re juggling the reference desk schedule trying to maintain some semblance of reliable service. Hey, I told (begged, pleaded, cajoled) everyone to get a flu shot last fall. What, aren’t my nagging skills up to the job?

But there’s sick… and there’s sick. If you’re fortunate, you get past the flu in a week or ten days, or about the same length of time it takes to fill a somewhat trickier than usual interlibrary loan request. Then there’s the sickness of the soul that comes from paying attention to life in these here United States, a disorder that ranks with that of the main character in Sartre’s Nausea—the most depressing novel I have ever read. If you ever start feeling a little bit too good about things, read Nausea. It will settle your hash into a cold lump in the bottom of your gut. But then, so does the general run of events in these days and times.

Lies, Lies, We Can’t Believe a Word He Says

What am I talking about? Oh, well, you know: Most everything. I could start with the way George W. Bush blatantly lies about the affirmative action program at my alma mater, the University of Michigan. With total disregard of fact, Bush, as you may have noticed, recently characterized the school’s efforts to achieve some reasonable representation of minority students as a “quota” system.

Has this man no shame? Is no lie too egregious to utter for the sake of shoring up what the political pundits like to call his “base”? (By the way, “Al Qaeda” means “base,” in case you were wondering.)

The University of Michigan’s affirmative action program is not a quota system by any stretch of the most fevered imagination. It involves assigning “points” to applicants based on various characteristics. The maximum number of points an applicant can attain is 150. An African-American applicant receives 20 points for being born that way. Children of alumni get a few points for being born that way. Athletes get points. Good grades earn more points than mediocre grades, and so on.

The sorely afflicted white upper-middle-class, from which UM draws most of its students, gets honked off about minority group members receiving such special consideration. It ain’t fair, they whine. Except they don’t say “ain’t.” Why should a black kid from a crummy downtown high school get such a cushy advantage in a college application?

What the whiners prefer to ignore are the invisible “points” the white children of privilege accrue simply as a consequence of the accident of birth. Being black is worth 20 points on the UM admission scale. How many “points” is it worth white applicants to have been born into affluent families? To have attended excellent suburban public or private schools? To have enjoyed for years the benefits of supplemental lessons in music, art, sports, and other activities? To have had lifelong access to first-rate health care? To have had opportunities for travel and other forms of cultural enrichment that are totally alien to the average inner-city kid? To have known from an early age that they are expected to complete college, and to take their places in the professional class?

The University of Michigan’s admissions policy entails a modest effort to help minority students overcome centuries of institutionalized racism, and to try to give the student body of the university some meaningful (dare I use the awful word?) diversity.

Those who claim that racism is merely history, that as a society we have “gotten over” that little bout of dyspepsia, I would invite to spend some time prowling the back streets of Detroit with me (yeah, I do that from time to time, taking pictures of the ruins), and try to account for the condition of that city without acknowledging the continuing reality of racism. And then join George W. Bush, that self-made man who never had an advantage in his life that he didn’t earn through his own hard work, in bleating about how “unfair” the University of Michigan’s admissions policy is.

Thanks. I feel better now. I’ve been steaming about Bush’s defaming my old school since the day he uttered his big lie. One of his big lies. Now I can move on–to questions of money.

If you work in a library supported to any extent by public funds, you’re probably dealing with the same sorts of happy matters as our crew. How do we provide service with money that doesn’t exist? Thanks to a decade of fiscal mismanagement by the administration of former governor John Engler, the state of Michigan is searching for pennies at the back of its socks drawer, and is slicing and dicing the budget from top to bottom.

Well, yes, according to news I heard while shaving this morning, our state legislators are all getting fixed up with new photocopiers, at $12,000 each. We wouldn’t want the poor dears at our state asylum for the helpless to have to share a machine down the hall, would we? Nevertheless, the rest of us who rely in some way on public funds are trying to live with an austerity that promises to be here for some time to come. At my library, we’re looking at cutting hours of service, canceling periodical subscriptions, laying off student assistants and assigning their work to librarians, not filling open positions, and trooping off as a group to the commercial blood donation facility down the street.

OK, we’re leaving the last one for next year’s budget, which will probably be even worse than this year’s. And you know what? We’re lucky. We’re not in California. Thanks to donors who recognize the value of education, we also have endowment income that allows us to provide a healthy roster of online databases for our users. Things could be a lot worse, and in many libraries they are.

George W’s plan, of course, will fix everything. Tax cuts for the rich. That’s the ticket. Oh, and a nice war, too. And some patriotic new legislation that will help the Ashcroft Brigade nip un-American activities in the bud.