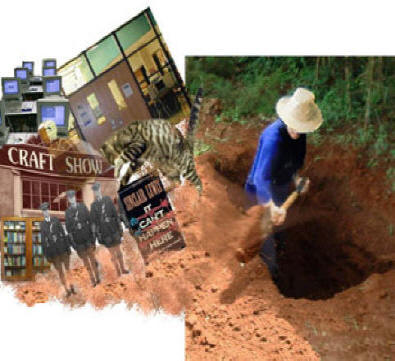 I’m Going to Dig a Hole,
Crawl in, and Pull in the Dirt After Me

The idea of going back into the past doesn’t seem so bad just now. Back to simple days, when your television offered maybe four channels if you were lucky, when “web” referred to duck’s feet, and the presidential candidate who tallied the most votes won. Imagine such quaint times!

When I Woke Up that Morning…

The past was on my mind when I woke up the day after the latest election.  The domestic enemies of America, in disguise as the Republican Party, were mugging all over the landscape. Trent Lott was grinning ear-to-ear on the front page of the New York Times. Tom (“The Exterminator”) DeLay was getting ready to take over the House. The Bush Gangsters, so eager for war that they can hardly contain themselves, were looking forward to a glorious new dawn of neofascist court appointments, corporate welfare, union bashing, gutting of the Bill of Rights, repealing Roe v. Wade, and “preemptive” war around the world. War will be peace, freedom slavery, and ignorance strength.

Yes, the “Party of Lincoln” is having a major testosterone experience while Old Abe gags in Political Heaven at the sight of his perverted descendants.

The night following the election, our dear animal friend, Fred the Cat, had a heart attack and died in my arms on the living room couch. He had been struggling with his heart condition for several months, and was holding on OK with a daily smorgasbord of meds, but the election was apparently too much for him. I knew I shouldn’t have let him watch the returns; now he’s out in the back yard, under the forsythia bushes. Fred was a good and brave cat, but his heart could not stand up to the predations of the GOP.

Got to Get Away

Longing for escape to an earlier day, I accompanied my wife on a visit last Saturday to my old high school, in a small town in a neighboring county. I had not set foot in the old school in nearly 40 years (38 years and seven months, to be pointlessly precise). The opportunity for the visit came in the form of a crafts bazaar advertised in the paper. If you have ever attended a crafts bazaar, you know the scene: A vast array of ducks, cows, pigs, sheep, ducks, and bunnies either carved from wood or stitched and woven into fabric, stretched down the hallways as far as the eye could see, with occasional tables of high-calorie food tended by middle-aged women in theme sweatshirts (Christmas, Thanksgiving, Hallowthanksmaseve). Almost everyone in sight was overweight.

While my wife went searching for the perfect holiday table decoration—we ended up with something in ceramic that looks like a dead pheasant lying on its back with dried flowers sprouting from its belly—I went wandering the halls of my youth.

I could not get much further from Election 2002, could I? So I thought.

Hiding Out in the Library

I wanted to see if I could enter the library. In one of the great achievements of my high-school career, in the second semester of my junior year I arranged my schedule so that I had hour-long study halls, back-to-back, at the end of the day. To say that I was an indifferent student in high school seriously understates it. I was not indifferent. I was hostile. I hated the athletic clique that ran the place. Save for the one taught by a great American history teacher (where are you now, Mr. Floro?), my classes bored me senseless; with a handful of fellow misfits, I began the day with little hope of anything but the clock advancing to the hour when we would be released from our daily pedagogical torment.

My back-to-back study halls redeemed the afternoon. I went daily to the wonderfully-large new library and signed in at the reference desk. (The sign-in sheets, I imagine, were scrutinized in the principal’s office in the endless quest to apprehend those bold enough to bust out of the joint on a pretext). From there, I slipped to the far back of the library, behind a waist-high range of shelves holding reference books, to a single-student study table near the large window-wall that overlooked the school’s front yard.

It was a great place for a misfit. When I sat down at my study table, I was all but impossible to see from any other point in the room. Close at hand were many racks of paperback books, of all sorts.

How often did I use my study halls to, like, “study”?  Rarely! Maybe that’s why I ended the year with a D- in chemistry. Instead of “studying,” I rampaged through those paperback racks.

I was a readin’ fool. This stuff was soooo much better than anything I was supposed to read for my classes. I was reading science fiction, history, novels, short stories—I even plowed through a good chunk of Darwin’s Origin of Species. All of this for fun. And it was fun. It didn’t help my chemistry grade, but did I care? Apparently not.

On the Saturday of the bazaar, I found the library. I felt that I was having an out-of-body experience, so odd was it to walk once again through the doors that had so long ago been my entryway to a better world. The first thing that struck me about the place was how little had changed. The furniture looked the same, for the most part. The light still entered the room from the big south windows the same as it had nearly four decades earlier. The quiet was the same.

The next thing that struck me was how much had changed: Computers were everywhere. Row after row of them. It’s good to know that my successors in the old school have access to all those great goodies on the Web.

But that’s not what I was after. I moseyed toward the back of the room, where I used to sit and read surreptitiously. The same reference shelves were still there. And, incredibly, some of the same little tables remained where I sat engrossed in everything from Darwin to James Thurber to Mark Twain. The tables look a lot older, now, a little banged-up at the corners. (So do I.) I walked up to one of those tables and touched it.

Time flowed from the wood through my hand, into my heart.

And I remembered the book I read here that affected me as much as any other at the time. It was Sinclair Lewis’s novel of a fascist takeover in the United States, It Can’t Happen Here.

I stood there with my hand on the table, feeling a little sick.

In Lewis’s story, published in 1935 and now out of print, a popular fascist—pandering to fears of crime, poverty, welfare chiselers, and the “liberal” media—wins the presidential election of 1936, with the help of a sympathetic religious broadcaster in the mold of Fr. Coughlin.* He gains control of Congress and the Supreme Court, and is then off to the races, with concentration camps for his enemies.

In It Can’t Happen Here, I thought I was reading a gripping treatment of a threat that had come and gone. I thought, boy, we came close, didn’t we? I didn’t realize that, while I avoided studying chemistry, I was seeing the developing political reality of my own middle age foreshadowed.

It is happening here. George W. Bush, the lying, conniving, war-mongering, wildly popular “president,” with Field Marshals Cheney, Wolfowitz, Rice, Rumsfeld, et al., and their shills at the Fox Network and on talk radio, are bearing out the future that Sinclair Lewis anticipated nearly 70 years ago. The fascists are taking over.

We don’t need to go back to the past. It’s right here and now. Sinclair Lewis would not be surprised. Neither is Uncle Frank. Even now, he’s packing a few things for camp.

*Father Coughlin, AKA “The Fighting Priest,” was a nationally popular political radio ranter in the 1930s who got his start in Detroit. He eventually wore out his welcome with his anti-Semitic broadcasts in the early years of World War II. Coughlin is a precursor of religious media blowhards like Pat Robertson, and of such secular windbags as Rush Limbaugh and Sean Hannity.