I recently heard from Matthew Johnson, managing editor of Portrait of New England online literary journal, that the publication was coming back from hiatus. Truth be told: we see a lot of magazines go on “hiatus” never to be heard from again, so I took this opportunity to talk with Matthew and his colleagues about what happened and how they bounced back. Portrait of New England publishes poetry, fiction, and creative non-fiction from writers who are residents, former residents, or have connections (e.g., attended college in the region) to New England.

Matthew: “The original team for Portrait of New England was Brett Murphy Hunt, Jon Bishop, and Smrithi Eswar, who are all based in Massachusetts. They published the first issue of the magazine in 2019, of which I was originally a part of, as they accepted two of my poems.”

I am originally from New Rochelle, NY, but spent the majority of my childhood in Stratford, Connecticut, of which I have fond memories. I moved down to North Carolina in high school, and outside of a year stint in upstate New York as a sports journalist and editor after my undergrad, I’ve been based in North Carolina for close to 13 years now. Though I have not lived in New England for many years, I’ve visited Connecticut since moving to North Carolina, and it has always been a special place for me.”

Brett: “Basically, the idea of a literary magazine is something we fully support, but it’s incredibly labor-intensive! The amount of hours spent setting everything up compounded with the reading and vetting of submissions, and I think it was hard to think about the next issue. I personally own two businesses and teach at two universities, so my day-to-day is already task-saturated. Plus, I think we were incredibly proud of the first one, so trying to top that felt impossible! Nevertheless, we kept our website active because we definitely had the idea to continue SOMEDAY.”

Jon: “I second everything Brett said! This was a passion project, but it was one that was becoming a full-time thing, and because of our schedules, we found it hard to think about what was next. We sort of put everything into issue one.”

Brett: “The idea of Matthew revisiting the vision we had and wanting to take the helm was awesome for us. We had remembered his poetry fondly from the first issue, and we couldn’t have found anyone better to pilot the second issue and beyond. Matthew, with us as the board of directors, just gives a great, well-rounded perspective as we all look ahead at getting this all started again.”

Matthew: “Our immediate goal right now is to continue welcoming and reviewing creative writers who have a tie to New England (e.g., current resident, former resident, attended school in the area). Our current deadline is Oct. 31, and we plan on publishing the first, post-hiatus issue before the end of 2022. We are also looking to expand our team by bringing in additional editors and reviewers of poetry and fiction/creative non-fiction, as well as a social media manager. In terms of an overarching goal, it’s to continue to grow the magazine by making more writers and readers aware that we’re back to publishing and accepting work. I am very glad that we’ve received a solid number of submissions so far, and I would definitely like to see that amount continue to grow in the future. I think it’s crucial that we remain on a set, publishing schedule. We’re going to publish one issue this year, but entering 2023, our goal is to publish two issues per year, one in early summer and one before the end of the year.”

Matthew: “I was really drawn into Portrait of New England for several reasons. As someone who has moved up and down the East Coast, I’ve always been fascinated by the notion of regionalism, and the branches in which that idea seeps through identity, culture, language, and the arts, including literature. Through my studies and readings of New England writers, I’ve always been intrigued by the voices that have come out of that part of the country, and how it’s unique compared to say, Southern Literature or Literature from out of New York. It is a region I love, and I want to celebrate the modern writers who were shaped by that part of the nation.”

Another intention which drove me was the original vision and mission set by Brett, Jon, and Smirthi; I thoroughly enjoyed being a part of that first issue, as well as reading the other writers featured in the magazine. I truly believe in the original goal they set out to accomplish, and I am deeply grateful that they’ve welcomed me to become the new managing editor of Portrait of New England. I am thankful that Brett and Jon will be staying on as members of the Advisory Board.”

And as you mentioned, Denise, there are journals that say they are on hiatus, but due to circumstances and different situations, they kinda don’t publish again. It’s unfortunate that it happens to those magazines, and it’s definitely something I had in mind when I first reached out to Brett, Jon, and Smirthi. I am very glad that they kept their website up these past few years so the writers in the magazine can continue seeing their work, and guests and readers could always view that first issue. There’s something meaningful to that, seeing your writing and name in a magazine, whether it be online or in print. I want to share that feeling with writers, especially ones who are up-and-coming and who may not have a lot of experience in the publishing industry.”

As an African American writer, I’ve noticed there aren’t many people who look like me working and serving in these types of editorial roles at literary magazines. In my years of writing, I have found the writing community to be more tolerant than most other lines of work and areas. Though I also think there is still more work to be done, and it is important to continue to add diverse perspectives and backgrounds to the field, especially in managerial roles.”

Visit the Portrait of New England website for more information! 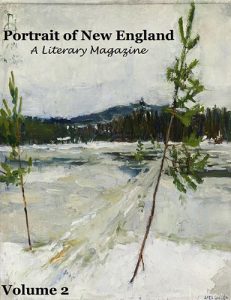