The fall issue of The Florida Review is their contest issue, highlighting winners of the 2007 Editors’ Awards in poetry, fiction, and nonfiction.

The fall issue of The Florida Review is their contest issue, highlighting winners of the 2007 Editors’ Awards in poetry, fiction, and nonfiction.

Kate Myers Hanson won in nonfiction, and her haunting memoir “There’s a Child Living in This House,” is more than worthy of the recognition. Rendered as an interior monologue, the piece is less like prose and more like a tiny jewel, hard and bright. She writes about her father’s sickness and addiction, a man she once danced with and who now cries out in pain. She also writes about her mother, a worn woman with a hand on her hip where “there’s no meat to grab, only a bony place,” who must now mother both her husband and her daughter.

Grace Danborn was awarded the prize for poetry. The small cycle of poems included here detail a journey to Alaska where the narrator learns to see the burned-out landscape differently, to see that “brown means more: / salmonberry and red-veined vetch, / gauze of tundra cotton.” The Alaska found in these poems is sharp and fierce but also populated by people like the woman in “Learning Borealis” who “whistles at the sky.”

Lastly, Joseph Levens’s short story “Critical Cartography” is a fortuitous pairing with Hanson’s memoir. The award winner in fiction, the story centers on Ethan, a precocious boy consumed with the injustices found in this world and his mission to find “the small good things” that might repair the damage that surrounds him. It is a beautiful story, a powerful one, and leaves us wondering about what luck really looks like.
[www.floridareview.cah.ucf.edu/]

# The Florida Review
Spread the word! 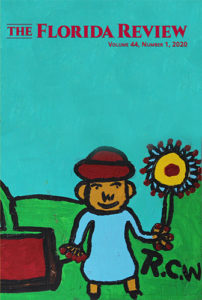 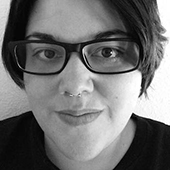