The Fiddlehead is published four times a year, devoting its Summer 2018 issue to poetry and reviews of poetry collections. The out-going co-editor, Ross Leckie, in his editorial opener, lets readers know that the special summer issues are “larger than the regular issues,” and “have the feel of something like an annual anthology.” Divided into three thematic sections each presented with a line from one of the poems within as a title and a black and white copy of the cover art—Waning Summer Light, 2017 by Sonya Mahnic—the issue contains poems by thirty-four poets and is packed with memorable work to keep company with even in the coldest of winters.

The Fiddlehead is published four times a year, devoting its Summer 2018 issue to poetry and reviews of poetry collections. The out-going co-editor, Ross Leckie, in his editorial opener, lets readers know that the special summer issues are “larger than the regular issues,” and “have the feel of something like an annual anthology.” Divided into three thematic sections each presented with a line from one of the poems within as a title and a black and white copy of the cover art—Waning Summer Light, 2017 by Sonya Mahnic—the issue contains poems by thirty-four poets and is packed with memorable work to keep company with even in the coldest of winters.

The thematic focus of the first section is a snipping away at history, at memory, at what happens and continues to happen to people in the course of their lives relative to others they live or interact with. Sometimes the interactions are with nature and sometimes they are with other people. “Transition” by Ali Blythe is a first-person narrative in which the speaker is trapped as a houseguest and doesn’t quite know how to extricate themselves from the situation. So much so that it feels absurd, the absurdity represented in these lines:

I’ve not once mentioned

a higher power and now
here is this horse.

The awkwardness of the relationship is palpable.

Catherine Seton’s “Bubble Wrap What She Bequeathed” is a closely observant narrative that describes the packing away of the things left after a loved one’s death, things she saved covered for protection, the speaker attentive to the difference in the light cast by a lamp long covered in cellophane and freed only after the owner has died. Memory slips in during the final task of taking care of the deceased’s belongings, the speaker acknowledging that “She saved what she could for good.”

The first section ends with “Cold” by Gwen Benaway, a seven-page narrative poem recounting life with one’s rapist. The speaker tells about “a violent encounter / we call rupture.” Addressed to the rapist, the speaker says, “I think I’ll never be warm again // you repeat it will be ok / over and over.” The poem reveals the feelings of fear, hurt, shame, love, and hate over time in a relationship without end in which the speaker is “scared to talk / or stop talking” and seeks release from a life of pretending and silence. The poems in this first section are powerful reminders of the treacherous and complicated paths human relationships can follow.

Section two of the issue takes its theme from Herménégilde Chiasson’s “White,” which begins, “We are at the end of the earth, taxis do not come this far,” providing the beginning of a thread running through poems about origins and apocalypses. The poem sequence by Chiasson represents the colors of the Acadian flag, the first poem opening with “Acadia is no more.” The mournful translations explore a culture that “melts like a rock in the sun.”

Shane Neilson’s sequence of four poems is a philosophical instruction manual on how to be human in the face of shame, obligation, fear, and freedom. The ideas are tricks played on unsuspecting souls in search of answers. The poems are complex and challenging, requiring scrutiny and analysis over time to take it all in. Each poem makes connections to the others in the sequence and not only contains instructions, but also questions. In “Shame-Trick” we are told “You may not take the condemned thing and condemn it again.” This feels like a definition of shame that the poet has supplied for us, and it feels right. In “Fear-Trick” we are commanded, “Ask yourself: What do I want?” and then provided with an answer: “I want to not be afraid.” Each poem presents layers of thought in explaining what life is and what thought does to us in relation to our emotions. In “Freedom-Trick” the most significant take-away seems to be this: “If your chest seizes as you read this, if it tightens and your throat closes, / then your body understands.” Neilson’s poems are a perfect end to the second section of this issue that questions existence and the ends of things.

The first poem in section three is “Under the Arm of Things” by Katie Fewster-Yan. Coming to this poem is like coming to the answers: “We get bored, pick weeds. / That’s life. We get to live all sides of it.” The poems in the final section deal with all sides of life, what is possible and what is not, what is visible and what is not. Included in the section are erasures from a project called Erasing Frankenstein in which participants find poems in Mary Shelley’s text and create visual poetry that shows what is left on the page when one “erases” selected words. The Erasing Frankenstein Collective is made up of “incarcerated and non-incarcerated members as well as students and alumni from the University of New Brunswick. Together, participants have performed a book-length erasure of Shelley’s Frankenstein,” an excerpt of which is in the pages of The Fiddlehead. The poems are memorable and visually stunning.

Additional poems in the final section convey the difficulty we sometimes have coping with emotions and circumstances. Catriona Wright’s “Apprenticeship” contains an answer for some of us in describing the relationship of a poet to her work:

I was still new to poetry,
not yet burdened by its blood
feuds. When I touched a word
it lit up, and I was a kid pressing
every button in the elevator,
and when the destinations dimmed,
grew remote and dark and terrifying,
I pressed them again,
harder.

When we do not give up on our art, we save ourselves. Literature and art can help us define our beginnings and our endings, and journals such as The Fiddlehead rescue us by providing works that contemplate our significance.
[thefiddlehead.ca]

# The Fiddlehead
Spread the word! 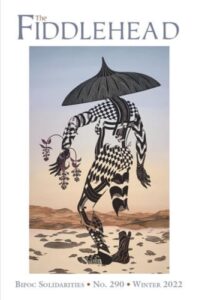 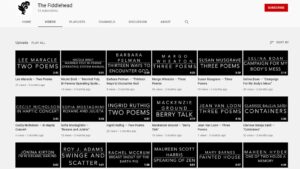 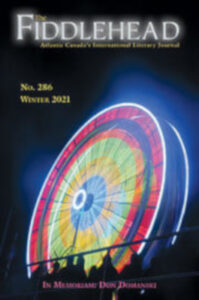 Celebrate 75 Years with The Fiddlehead