South 85 Journal lets readers and writers know that they’re especially interested in writing with a strong voice and/or a strong sense of setting, and the writing in the Fall/Winter 2015 issue demonstrates this preference, with just enough selections in each genre to keep a reader interested without being overwhelmed. There’s no padding here, no skimming of pieces, no skipping anything over. Each piece begs to be fully consumed.

Justin Eisenstadt brings a strongly-voiced narrator to the table in his story “Fish Hook.” Eisenstadt writes his female, middle-aged narrator with such conviction, I thought I was reading a story written by a middle-aged woman writer until, surprised, I came to the author bio at the end of the piece. “Fish Hook” follows the narrator and her family—her new husband and his son, her two daughters from her previous marriage, and the family dog Rock—to their day together at the lake. Eisenstadt builds the tension between the characters to its inevitable breaking point caused by a fish hook.

The relief is only momentary, however, as tension starts back up again almost immediately in Jasmine Evans’s “Peppermint and Memories.” Our narrator, Stan the bus driver, serves up some foreshadowing right in the first paragraph, “Most days, this task was easy. But he knew—better than most parents—that things could go horribly wrong.” On his young daughter’s birthday in the wake of her death, we ride as passengers in his bus as his mind begins to further unravel, as alarmed by his behavior as the children he’s driving home. When a mysterious man appears beside Stan and offers his daughter back for a price, Stan has to decide whether the price is something he’s capable of paying up. Suspenseful yet touching, Evans has concocted a read that grabs on and refuses to let go.

The nonfiction in this issue is just as absorbing. Marlene Olin offers reprieve from the seriousness of dead daughters and broken families in her humorous nonfiction piece “King Kong Versus Godzilla.” The piece begins:

Knowing he would pick me up at six p.m., I started getting ready at noon. Robbie and I hung out together all summer. Sometimes at his house. Sometimes at mine. This was going to be our first real date. A double date. Since we were only fourteen, he was supposed to ask his brother Brian to drive. Brian was the responsible one. Pre-med. Nice car. Instead he asked his brother Billy.

And as readers may be able to guess, there’s more that doesn’t go quite as planned. More than a laugh-out-loud funny piece about the horrors of a teenager’s first date, it’s a piece that possibly suggests how Olin first began writing. Leaving her date in the movie theater, Olin instead chats about books with the boy working at the concession counter. It’s during this conversation that she learns something important: “‘This doesn’t have to be your reality. You can make up your own world. Your own reality,’” says the boy. So she does. When she gets home and her family asks about the date, Olin makes her own reality and is hilarious in doing so. From how well her jokes were timed, to the brutal descriptions of her family, date, and surroundings, I wouldn’t be surprised if Olin’s dabbled in stand-up comedy somewhere along the line.

The rest of the nonfiction veers back into more solemn territory. “The Gar in the Tub” by Louis Bourgeois, taking place in 1978, shows a child’s first understanding of the difference in wealth and opportunity that can reside even between neighbors. In “The Proud,” John Soltysiak steps outside of himself in his second person piece that watches the deterioration of a relationship after military deployment. Both Soltysiak and Bourgeois leave off with ending paragraphs that are sure to follow readers around for the rest of the day.

This issue’s poetry selections are equally memorable as the poets show off their imagery skills. Ellen Roberts Young takes a close look at an overlooked space in “Spice Shelf,” characterizing the spices: “Saffron, in / its tiny envelope, has waited years / for another special occasion” and ending with a look at the woman who cooks with them, a piece showcasing the comfortable familiarity of repetition. Carl Boon takes us to August 6, 1945, the day of the atomic bombings of Hiroshima and Nagasaki in “What I Remember.” The day is clear as if he and we were there with the speaker and her daughter when the bombs drop, moving about daily tasks before suddenly flitting away:

I was putting the breakfast dishes away.
Sakura was listening to the radio.
I told her I’d cut her bangs,
[ . . . ]
her wrists
brushed them often from her eyes,
her father’s eyes. He was dead at 8:17

The sudden shift and the spiral away from the “brightest morning in many days” plunge us into the speaker’s loss, the language painting the scene.

The Fall/Winter 2015 issue of South 85 Journal promises and delivers strong setting and characters, all written by a carefully curated selection of strong creative writers.
[www.south85journal.com] 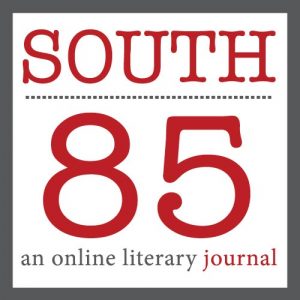 A Treasure Trove for Writers