What first drew me into this magazine was the art, by Alison Scarpulla. The table of contents is set up as a collage of images, each one pertaining to a piece of prose or poetry. At least for the art, make sure to take a look at this issue, though I suspect you’ll find plenty in the writing to keep you on the site.

“Antimasque” by Lee Scrivner is a one act play that takes place in The Knotted Would, “an imaginary forest where the flora is knotted to the ground.” With the help of Fell and Fall, Lord Garden makes a map of the land, down to each plant. A ribbon is tied around each item to show that it has been documented. He comes across a boy making music with a reed and is upset that the reed has been moved. The play is about order in the world, and questions if everything should need its place:

When I first read “Eye for an Eye” by Russell Helms, I thought there’d be no way I would include it in the review—it grossed me out. But then I found myself thinking about it days later, and I knew I had changed my mind. In it, Tristan tries to avoid his high school lab partner whose eye he poked out in class. Later, in college, she taunts him and makes him watch as she plays with her eye socket:

With her fingers she spread the lids apart. A pink wet muscle. She poked her finger in there. She looked at the objects in her lap. She picked up a pocketknife and slid it in, wincing.

With an accident as horrible as that, how long are you indebted?

In “Sleeping in Ditches” by Biff Mitchell, the narrator goes around, spouting out his “philosophical” ideas about the world, and it works as a social commentary (even if it’s just the character’s commentary). Yet, I found it quite humorous:

I have thoughts about mad cows. I think I’d be mad too if somebody slaughtered me, stuffed me with food coloring and preservatives, pounded me into patties, fried the crap out of me, shoved me into a bun soaked with thick sauce and half-hearted vegetables, and served me up to some pouty little bitch who didn’t even have the grace to eat me because she was afraid to join the army of zombies that mad cows are creating to get revenge on the human race for feeding cows to cows.

“Nauman’s Installation” by Peyton Burgess tells the story of a young man who works in a museum where the art installations and walls keep moving, making the building a maze to get through. Stuck with the job of telling people not to step on a piece of art that is installed in the floor, he is unhappy with his job. The piece offers great questions about how to appreciate art, about what’s permanent, and about how to be lost.

What started as a writing prompt, this magazine, now in its sixth issue, “offers a wider orbit, a larger cloud.” I certainly hope Otis Nebula is around for much longer because I like what I’m seeing.
[www.otisnebula.com] 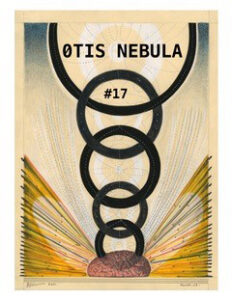