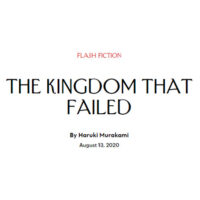 “The Kingdom That Failed” is a piece of flash fiction by Japanese author Haruki Murakami, published by The New Yorker. The introduction grabs you with no hesitation, throwing you into a unique setting that prepares you for a grungy fantasy adventure written around a fallen kingdom. This lasts for a grand total of two paragraphs, at which point the story changes gears to a more modern setting, dealing with life and people, not swords and dragons. It is a change in direction that totally threw me off guard, opening me up to the rest of the narration.

The story continues with an in-depth description of this man named “Q,” or more the struggle to explain Q. He is a handsome man, five hundred and seventy times more handsome than our narrator, with a great personality, from a well-to-do home, yet he isn’t quite extraordinary in anything, yet good at everything. Q is a true kingdom, a character without flaws.

Inspired by the quote, “To see a splendid kingdom fade away, is far sadder than seeing a second-rate republic collapse,” this story quickly and briefly shows a glimpse into the future life of Q. It delivers the known-too-well feeling of failed potential. While we are content to see the narrator complacent with where he is at in life, it is striking yet subtle to see the fall of Q. It isn’t a grand fall of a literal kingdom, and it doesn’t have the imagery of crumbling stone bricks and thick black smoke. Instead, we see a defeated man covered in soda, stuck in a thankless career. “The Kingdom That Failed” is a reminder of the somber reality of humanity, one that trumps any attempts of fantasy.

Reviewer bio: Caleb Willis is a college student studying Biochemistry and Applied Mathematics. He likes to read in his fleeting spare time.