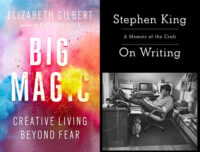 Throughout the quarantine, I took to rereading old favorites. Most notably, Elizabeth Gilbert’s Big Magic: Creative Living Beyond Fear and Stephen King’s On Writing: A Memoir of the Craft—two books on the craft of writing that I recommend, particularly to aspiring writers.

Oddly enough, I was never a huge fan of either author’s prior works of fiction. (Although, admittedly, I have enjoyed movies based on some of their oeuvres.) In 2015, I purchased Big Magic prior to boarding a long-haul flight. Some fluff to pass the time, I reasoned at the time. By pure luck, On Writing was given to me at a holiday party during a random gift exchange.

Aside from the personal admissions and writing advice she generously proffers, the concepts Elizabeth Gilbert explores within the pages of Big Magic are often ethereal. Various anecdotes about the magical ways in which ideas enter and exit our consciousness are not only entertaining, but also showcase her incomparable talent for storytelling.

In “The Tiger’s Tail” section, in the chapter titled “Enchantment,” Gilbert relays how American poet Ruth Stone supposedly “caught” poems by the (figurative) “tail” as they “galloped” by her on her family’s farm.

Contrarily, in On Writing, Stephen King pragmatically informs readers that there’s no magic surrounding writing. “You might not learn the Magic Secrets of Writing (there aren’t any—bummer, huh?) . . .” Casually refuting the value of his own informative book on writing, King later adds, “You don’t need writing classes or seminars any more than you need this or any other book on writing.”

Regardless of whether or not books on writing are actually “needed,” I loved re-reading these two gems and have since revisited both authors’ works of fiction, for which I have developed a greater (albeit, belated) appreciation.

Reviewer bio: Renée Cohen is a freelance writer and artist from Canada.