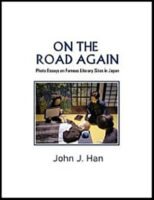 As a literary pilgrim and a John Steinbeck scholar, John J. Han has traveled to Japan since 2007 to attend the annual Steinbeck conference and roam to some famous literary sites and Zen temples to pay his respects to iconic writers such as Matsuo Basho, Masaoka Shiki, and Yasunari Kawabata and delight himself in learning about Japanese culture. His literary travels have borne fruit, a collection of ten photo essays titled On the Road Again, which follows the footprints of Matsuo Basho’s well-known work, The Narrow Road to the Deep North, a poetic narrative in the form of haibun.

Han’s collection visually presents the literary sites he has visited. The unique lenses bring the reader the mindscape of the author’s literary pilgrimage and sensibility to Japanese literature and culture.

Like a tour guide who has a backpack of stories, Han leads the reader to see the sites and “listen” to his narratives. Sometimes he offers his own haiku to accompany his photos. For example, his response to the replica of Basho’s hut sounds pleasant, though slightly ironic:

a long pilgrimage
to Basho’s hut
a fake front

Another interesting part of Han’s book is that some captions provide useful information for better understanding of the sites presented by his photos. Below is the one accompanying the photo about Masaoka Shiki writing his death haiku (used also as the book cover):

Shiki died of tuberculosis at the young age of thirty-four. In this scene, displayed in the Shiki Museum, he writes three death poems (jisei) in haiku form on September 18, 1902, one day before his passing.