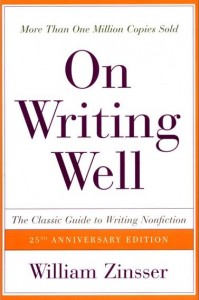 “Visions and Revisions” follows the 35-year history of multiple editions of William Zissner’s best-selling book On Writing Well. From its inception (“”You should write a book about how to write,’ my wife said in June of 1974 when I was complaining to her, as I often did, that I had run out of things to write about.”), Zissner discusses each of the subsequent editions and their changes:

“By 1990, however, America had changed considerably. On Writing Well was a child of the 1970s. I knew that its principles were still valid. But what about its references and its tone? Would it strike a new generation of readers as an old man’s book? I took a closer look and saw that my 14-year-old product was slowly slipping out of touch. Without a major overhaul it would wither and die.

“Most obviously, much of the nonfiction I now admired was written by women. Yet my excerpted passages were still mostly by men—the graybeards who had been models for my generation of journalists, now gray-bearded ourselves. The language was also lopsidedly male; he and him were still the prevailing pronouns, though women readers had chided me for referring to the reader as he, pointing out that they did much of the nation’s reading and resented having to picture themselves as men….”

Read the rest on American Scholar.