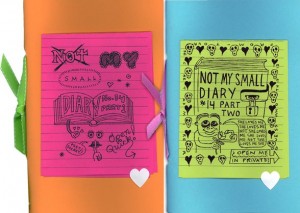 Thanks to Delaine for sending along recent issues of Not My Small Diary . What a great introduction to this comic zine – a compilation of artists tucked between the covers. Though NewPages lost its Zine Rack when Sean Stewart moved on, and we have tried several times to revive it, we still have a great personal interest in zine culture – some of the most indie of all publishing. If you’re not familiar with Delaine’s work, check out both MSD and NMSD.