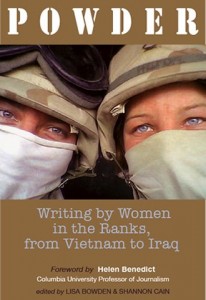 “Poetry and personal essays from 19 women who have served in all branches of the United States military. Contributors to Powder have seen conflicts from Somalia to Vietnam to Desert Shield. Many are book authors and winners of writing awards and fellowships; several hold MFAs from some of the country’s finest programs. The essays and poems here are inspired by an attempted rape by a Navy SEAL; an album of photos of the enemy dead; heat exhaustion in Mosul; a first jump from an airplane; fending off advances from Iraqi men; interrogating suspected terrorists; the contemplation of suicide; and a poignant connection with women and children in Bosnia. Their writing exposes the frontline intersection of women and soldiering, describing from a steely-eyed female perspective the horror, the humor, the cultural clashes and the fear.”

Excepts can be viewed on the Kore Press website.