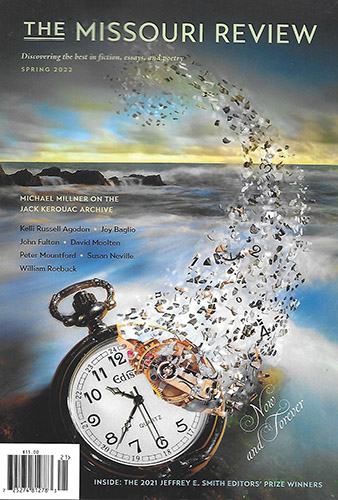 From Speer Morgan’s “Forward: Practical Living,” which opens the Fall 2018 (41.3) issue of The Missouri Review:

“Trends in international politics toward right-wing nationalism, racism in endlessly renewing guises, and the pursuit of material short-term gain regardless of what it does to the earth’s environment and national budgets: all these things make me wonder how well we remember our history beyond last year or even last month. The end of World War I led to an utterly changed, financially crippled world; World War II resulted in the physical destruction of much of Europe and between fifty and eighty million dead, only to be followed by a series of cold and hot wars arising partly from long-misguided imperial assumptions. This nation now has a president who among other things denies climate change, while the largest wildfire in California history burns along with sixteen others and the highest mountain in Sweden just lost its stature because it has melted so much this year.

“Current politics and culture wars are surely a passing phase, like the reign of the Wicked Witch of the West in L. Frank Baum’s 1900 novel The Wonderful Wizard of Oz. When Dorothy throws a bucket of water on her, the witch will surely melt. Surely. However, given how little we appear to remember about history, one wonders if we will have to go through some cataclysm before we go for our buckets.”