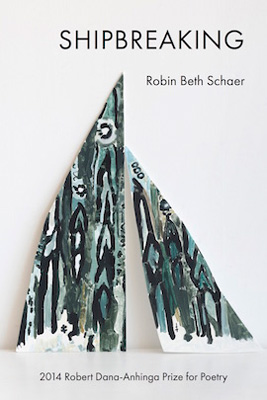 The Robert Dana-Anhinga Prize for Poetry began in 1983 and is open to poets for a manuscript of original poetry in English. Held annually, winners receive $2000 and a reading tour of Florida colleges and universities.

Robin Beth Schaer is the 2014 prize winner with her first book of poetry Shipbreaking. Her work has also appeared in Tin House, Bomb Magazine, Paris Review, Denver Quarterly, Washington Square, and Guernica, among others.

From Schaer’s website: “Shipbreaking charts a beautiful and dangerous journey. It is an intimate and interstellar odyssey where seas rise, mastodons roam, aeronauts float overhead, bodies electrify, and a child is born as a ship wrecks in a hurricane. The speaker here is curious and fierce, consulting scientists, philosophers, ancient maps, fossil bones, and lovers in order to survive and understand the strange majesty of living. With empathy and exaltation, the poems collapse the distance between natural disasters and human struggles, interweaving relationships between the upheavals and renewals that both the heart and Earth undergo.”

Shipbreaking will be published this August.