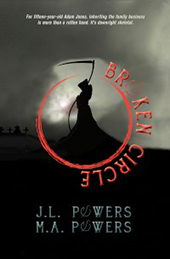 I can’t imagine having one successful author in the family, let alone two, and then the two of them writing – not one book together, but a series? J.L. Powers and M.A. Powers, brother and sister, have embarked on just such a journey together with the release of the first in a series of supernaturally themed YA novels. Broken Circle published by Akashic Books’ YA and middle-grade imprint, Black Sheep. I have long been a fan and follower of Jessica Powers, her previous YA publications reflecting her wide range of interests as well as abilities: The Confessional  (Knopf, 2007), This Thing Called the Future  (Cinco Puntos, 2011), Amina  (Allen & Unwin, 2013), Colors of the Wind  – a children’s picture book about Blind Artist and Champion Runner Geroge Mendoza with artwork by Mendoza  (Purple House, 2014). This is her first venture into the supernatural, which Claire Kirsch of Publisher’s Weekly describes as “a mix of contemporary characters and setting with a mythological world.”