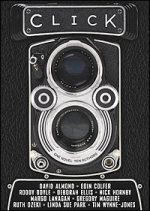 “A video message from a dead person. A larcenous teenager. A man who can stick his left toe behind his head and in his ear. An epileptic girl seeking answers in a fairy tale. A boy who loses everything in World War II, and his brother who loses even more. And a family with a secret so big that it changes everything. The world’s best beloved authors each contribute a chapter in the life of the mysterious George “Gee” Keane, photographer, soldier, adventurer and enigma. Under different pens, a startling portrait emerges of a man, his family, and his gloriously complicated tangle of a life.” – Scholastic Books

“The idea was that one author would kick things off by writing a chapter, and then that chapter would be passed it along to the next author on the list, and from there the chapters would accrue and the book would grow. We were told we could take as our inspiration any aspect of the chapter or chapters we received in our turn—a character, or an event, or a location, or a word or object—and that we should feel free to follow the story in any direction it took us, forward or backward, up or down, in time or through space.” – Ruth Ozeki, contributing author

New Book :: The Poetics of Wrongness