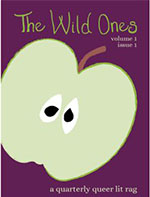 Morgan Laidlaw and Zan Giese are the editorial force behind the newly launched biannual PDF The Wild Ones: A Queer Literary Magazine. Publishing stories, essays, and poetry written by LGBTQ+ writers, for LGBTQ+ writers, that “depict life and the world as we see and experience it,” The Wild Ones means to create a space for queer authors.

“There are so many outlets that reinforce hetero-normative culture,” Morgan tells NewPages, “and we need more works and publications that cater to us as queers. Most people can name at least one gay magazine or one queer author who has been published in a major magazine. But magazines like ours? Where they are just queer magazines? Space is what we are all looking for. Space to fit in. Space to exist and space to create. There are gaps where queer people don’t quite fit into mainstream expectations and some queers who still don’t fit at all. It’s not that what’s already out there isn’t good enough, it’s that there isn’t enough. Period.”

Morgan and Zan combined this motivation with inspiration to create the magazine’s title. “The name is a hat-tip to Oscar Wilde,” Morgan explains, “but also to Where the Wild Things Are and Maurice Sendak and Thorton Wilder. It’s also a reference to the kinds of stories we’re looking for: wild stories that don’t conform to stereotype or convention.”

Their first issue is a reflection of this mission, featuring an amazing science fiction short story from B.R. Sanders and hard-hitting poetry from contributors like Mark Ward, Sea Sharp, and Alaina Symanovich. “Right now,” Morgan says, “we’re trying to establish ourselves as a source for high-quality literary work through our journal and cultural criticism through our website. In the future, we’d love to publish quarterly, and move into other publishing venues as well.”

The Wild Ones accepts submissions via their online form and welcomes pitches sent e-mail. The editors are also looking to grow their writing staff. If anyone is interested in writing for The Wild Ones website, send an email with a writing sample.