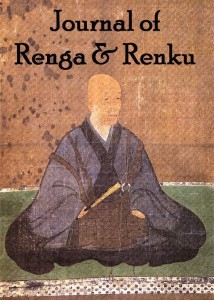 Editors Norman Darlington and Moira Richards are both active in the study and practice of renga and renku and have collaborated on various renku related projects since 2005. Journal of Renga & Renku is their newest project, and includes a periodical, renku contest, book publishing, and an online community – Haikai Talk – devoted to haikai and all poetic forms orginating in Japan and written in English.

JRR is devoted to all aspects of renga and renku, including scholarly articles, poems, discussions, contests, critiques and more that will interest Asian Studies scholars as well as teachers and students of English literature/poetry. The editors “believe it will also be of interest to poets experimenting with the writing of renku in a number of languages around the world today, and to practitioners exploring aspects of renku and its za as an educational/social/therapeutic tool.”

The inaugural issue, published on demand via Lulu.com, includes a great deal of content, including a report on “Four Sign Language Renga” by Donna West and Rachel Sutton-Spence. This unique article includes commentary and links to YouTube videos of these sign language poetry performances; I highly recommend the publication for this content alone! But, there’s so much more:

Essays:
“Renku – A Baby Thrown Out with the Bath Water: A Start of Reappraising Shiki” by Susumu Takiguchi
“Gradus and Mount Tsukuba: An Introduction to the Culture of Japanese Linked Verse” by H. Mack Horton
“Longer Renku: The Hyakuin of 100 Stanzas” by William J. Higginson
“The Mechanics of White Space (or Basho Cranks-up the Action)” by John E. Carley
“The Alchemy of Live Renku” by Christopher Herold

JRR will publish again at the end of 2011 and is open for submissions until October 1, 2011. See JRR‘s website for full submission information.