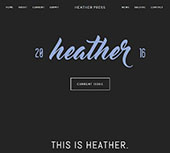 Enticed? I certainly was, which is why I contacted Kelsey Mars, founder and sole editor of Heather, a new online indie literary publication, to learn more about this nakedness next to me in bed.

First – the name. “Heather,” Kelsey tells me, “is a unique feminine name, as well as being a shade of purple and a color generally associated with alternative sexuality. I wanted Heather as a publication to embody all aspects of this, to draw up images of bad girls in pleated skirts and the back row of the movie theater.”

Publishing fiction, non-fiction and poetry as well as digital art, photography and film, readers can determine whether or not the content stands up to its namesake. The free, online PDF features poems “about subjects that might make you uncomfortable,” Kelsey warns, as well as “erotica, film to chew on, stories about robots, flash fiction to make you cry a single diamond tear.”

While new to this venture, Kelsey is a seasoned literary professional. “I’ve been published in Huffington Post: Queer Voices, Thought Catalog, Miscellany, Meat For Tea and am upcoming in Painted Bride. You can read my original screenplay, Gotham Summer, as I tweet it out: @gothamsummer. I studied Media Theory and Communications at the College of Charleston, where I was first introduced to flash fiction writing. Since then, I’ve written two novels and more poems and flash fiction than is healthy for one person. In the light of day, I work on the Customer Experience team at Casper Sleep and preach the good word of Elizabeth Gilbert’s Big Magic: Never ask your art to pay for you.”

While involved in so much of her own writing,I asked Kelsey the motivation for adding this responsibility. “So many of us get rejection after rejection, often without knowing why. So many voices go unheard in this industry and it’s a damn shame. I started Heather to publish the weird stuff, the stuff that other publications might not see as ‘premium’ or literary enough. I wanted experimental stuff, the weirdest thing someone has ever written. I wanted a home for that stuff.”

Writers looking to home their works should know that Kelsey manages submissions on a rolling basis, accepting works as they fit the arc of each issue, offering the work more than one shot, but releasing it if it hasn’t found its fit after two issue cycles. Heather accepts simultaneous submissions, which keeps the editorial process timely.

Already, Heather has been made home by authors such as Maggie Cooper, whose first published pieces of fiction appeared in Heather and, as Kelsey notes: “totally blew my mind”; Monique Quintana, a fiction editor herself “whose shit haunts my dreams” Kelsey says; and Kirsten Bledsoe, a filmmaker whom Kelsesy knew prior to Heather, who has made both a feature length series about queer women of color and a prodigious ode to Marilyn Monroe’s poetry (which Heather published).

The future for Heather is boundless: “I want to go to Mars, dude,” Kelsey tells me with an edge of seriousness. “I want to see what’s outside of our solar system. Send me poems, fiction, art about that stuff. The stuff that we don’t even know yet. Let’s go to uncharted territory and live to brag about it.” Back down on earth, Kelsey hopes to publish Heather three times this year and keep the publication going well beyond that.

In addition to the regular publishing cycle, Kelsey is planning a special holday issue. The publication is not holiday themed, “but rather what you actually want to be reading when you’re avoiding your family over the holidays,” Kelsey says. “I’d like to publish more creative nonfiction in this issue, poetry about our fears, things like that.” Submissions accepted via Submittable; deadline November 27 to be published December 11.

As a final word, Kelsey encourages writers: “The most important thing I want people to take away from Heather is that you can do it to. You can publish the stuff YOU love. And if more of us do that, more of us will realize we’re someone’s favorite thing.”