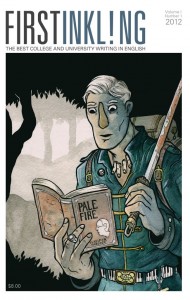 First Inkling is an international student literary magazine, publishing short stories, poetry, graphic fiction, one-act plays, short film (screenplays), novel chapters, and more. Works are accepted from students currently enrolled in accredited colleges or universities at the community college, undergrad, graduate, or post doctorate level, from anywhere in the world. Works in languages other than English will also be considered, as long as it is submitted with an English translation.

All works published in First Inkling will be entered in the Associated Collegiate Press Pacemaker competition, with $750 cash awards going to the best in: Fiction, Narrative Nonfiction, and Poetry.

First Inkling invites student writers to become members to the site and then to post to the publication’s blog. Interested students are also invited to become Associate Editors.