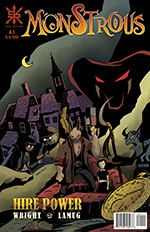 What do you get when you mashup the mythos of Frankenstein with steampunk robotics? Toss in “True Grit” meets “Three Men and a Baby” anti-heroes and some strong, clever, resourceful, female characters “just as likely to jump into bar fights as their male counterparts,” and you’ve got Monstrous. No doubt about it.

Comic scriptwriter Greg Wright and artist Ken Lamug are the creators of Monstrous, a four-comic series that “tells the tales of everyday monsters, robots, and townspeople caught up in the changes sweeping Europe in the wake of Dr. Frankenstein’s mad science. But even in this twisted landscape, our unconventional heroes—giant rabbit monsters, steam-powered cyborgs, and babysitting bank robbers—all try to live by their own code of honor.”

Source Point Press has optioned the series and will be releasing them as a book in addition to readers being able to get the series delivered one issue per month starting in February. Source Point Press says they are using Kickstarter as a way to better interact with their readers and offer up some great incentives – like SIGNED COPIES! My favorite!