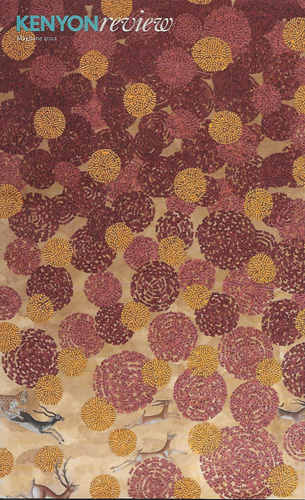 Kenyon Review Editor David Baker opens the May/June 2019 issue with his commentary on the annual “Nature’s Nature” theme. In response to our having witnessed “the Trump administration take further steps to release two hundred thousand more acres of public land—this time in Utah along the Canyonlands and the Green River—to ‘development,'” Baker notes that “Greed, stupidity, and fever for power are not new to our country or even our species—read Shakespeare, Dante, Homer—but the velocity of unfixable damages and the extent of losses are without precedent.”

Baker asks, “Are we one or two generations away from the point of no return for environmental stability? Is ours the last generation with hope of preventing or slowing a massive disaster? Is it too late? The calculations come every week, with variables, but the constant alarm is the same.”

This is what compelled him, he recounts, “to curate a special feature on ecology and poetry . . . I wanted to showcase new poems that resisted such forms of power and that named one by one the spectacular, beautiful, and often endangered citizens of the natural world.”

Now an annual issue, the writers featured each year are purposefully diverse in that the publication does not choose the same authors to appear more than once. The compilation features twenty-seven new poems, one essay, and two portfolios of artwork. For a full list of content with some selections available to read online, visit the Kenyon Review.