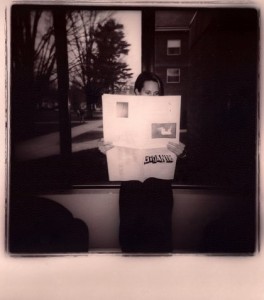 The first issue of Gigantic is out, and it indeed holds up to its name (or rather, needs to be held up). This puppy is big, but in a fun-to-read-on-the-bus sort of way, and I imagine the superlarge, four-color image by Nat Russel of dancing cowboys is going to end up decorating a lot of walls.