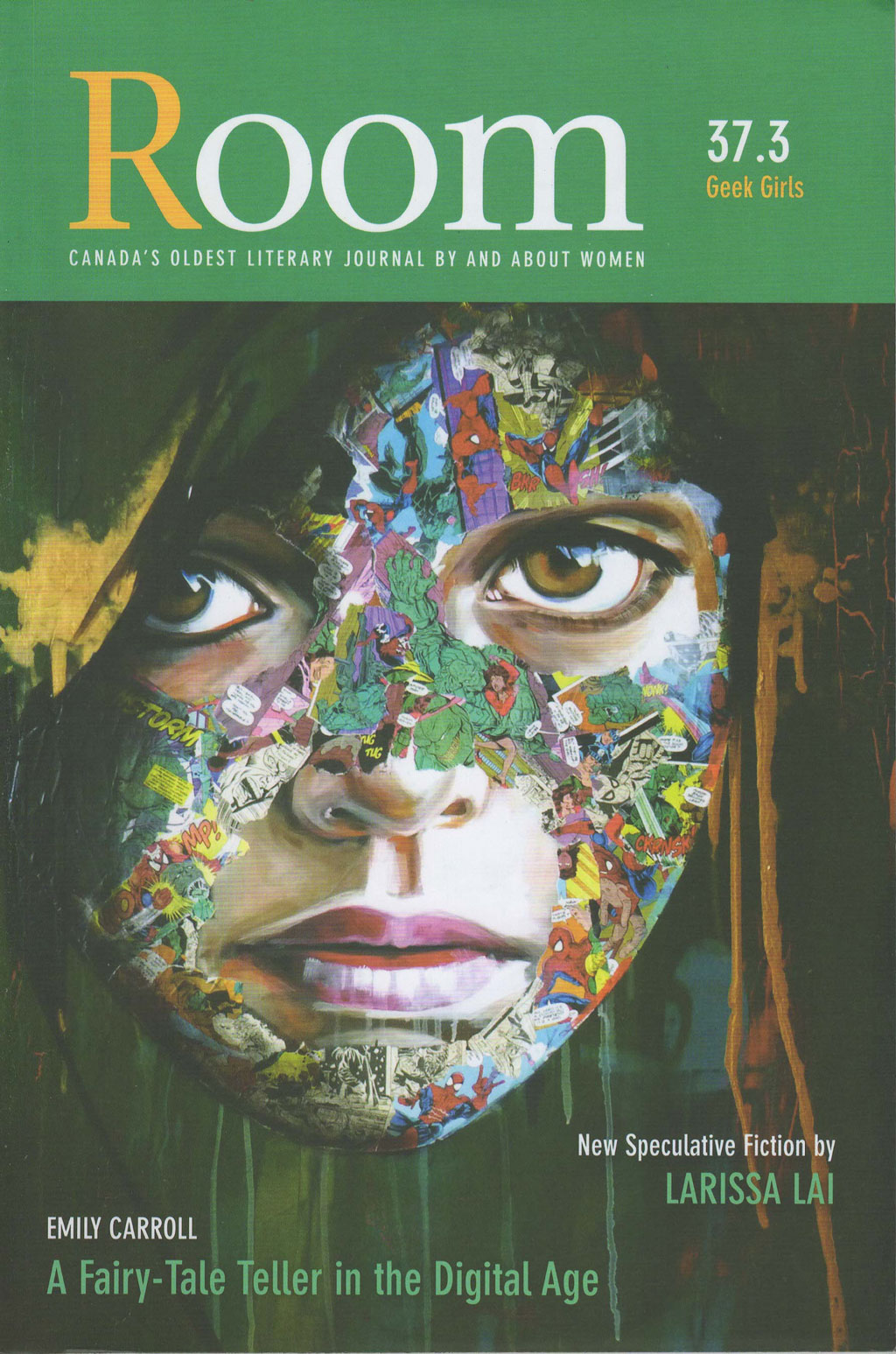 Paying full notice to the current phenomenon of women pretending to be geeks to attract males and “the insidious ‘Idiot Nerd Girl’ meme,” Meghan Bell introduces this special “Geek Girls” issue of Room to be in despite of all of “that noise.” She writes, “‘Geek Girls’ includes Buffy The Vampire Slayer and Torchwood fandom, poetry inspired by comic books and fairy tales, as well as new work by acclaimed speculative fiction author Larissa Lai, an interview with horror writer and illustrator Emily Caroll, and comic book-inspired artwork by Sandraw Chevrier. Hockey nerds slip ‘lightly homoerotic’ fan fiction into the hands of a Canucks player, biochemists attempt to fit in with mathematicians and physicists, experimentalists and theoreticians, skeletons come to life , and zombies fall in love.”

The cover, by Sandra Chevrier, is a perfect selection for this issue. The artist writes, “The cage series is about women trying to find freedom from society’s twisted preconceptions of what a woman should or shouldn’t be. The women encased in cages of brash, imposing paint or comic books that mask their very person symbolizes the struggle that women have with false expectations of beauty and perfection as well as the limitations society places on women, corrupting what truly is beautiful by placing women in prisons of identity. By doing so, society is asking them to become superheroes. I use collage or loose and heavy textures of paint that make the woman seem to be emerging from the surreal world within the canvas. A dance between reality and imagination, truth and deception.”

In an interview with Emily Carroll, the issue of women interested in “geek culture” being called fake is brought up. However, Carroll says she has never seemed to have a problem with the issue: “I don’t think I’ve ever really experienced being called a fake geek . . I have friends who have experienced it because I do have a lot of friends who are involved with video games. I hear reports of them being spoken down to or treated like they don’t actually play the game. It’s definitely a huge thing. I feel like I’m too much of a recluse to get the full brunt of it. Maybe it’s because I draw Dune fan art that nobody has ever questioned my Dune cred.