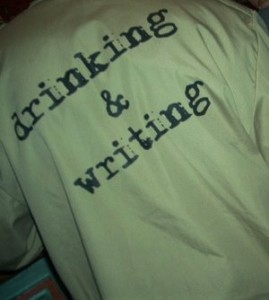 “Through a radio show, productions on stage and in bars, a website, and on the page, The Drinking & Writing Brewery exists to preserve the spirit and devotion of the hard drinking writer and to uphold the rituals of creativity through their passion for the written word. We strive to attract others who share these principles.”

The radio show is one hour long and each show explores the connection between creativity under the influence and includes interviews and reports on a featured writer, a featured bar/brewery, music, and original writing by artists from Chicago and everywhere else. The Drinking & Writing Brewery Radio Show on WLUW, 88.7FM is aired the first Sunday of every month at 6PM and is available via download on the website after the air date.

Also included on the roster of events, the Beerfly Alleyfight, in which contestants must match homebrew, homemade food, and an art interpretation of both in an “asskicking alleyfight.” And then there’s the Drinking & Writing Festival which requires a two-drink minimum of all participants – images of this year’s winners are on the site.

The masterminds behind this? Pete Crowley, Steve Mosqueda and Sean Benjamin – with plenty of nods to Bukowski.