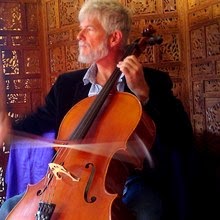 Daniel Sperry, a quirky 59-year-old cellist, composer and spoken word artist, from Ashland, Oregon has recently received permission through the Permissions Company of Mount Pocono, PA, on behalf of the William Stafford Family Trust, to undertake a musical body of work with the poetry of William Stafford, America’s first poet laureate, as its centerpiece.

The end result of the project is that people will come to a show that is incredibly entertaining, deep, and joyful. Stafford’s words are just the vehicle to carry a thread of discovery about life, and the music will carry that feeling. Each member of the audience will leave transformed from the connection to that special quality that comes through the words and through the music. Daniel’s mission is to bring that sense of connection that the world needs now, through music and great poetry, sung and played by vibrant, masterful musicians.

Daniel recently completed 200 concerts in living rooms around the country, traveling solo in his 200 Toyota Sienna van, couchsurfing along the way, sharing his original cello music and the poetry of Rumi, Hafiz, David Whyte, William Stafford and others. His current catalogue of creative work consists of two spoken word CDs and four instrumental CDs.

The new project focuses on the poetry of Willam Stafford, the reknowned American poet and author of some 20,000 poems. Stafford would have been 100 this year, and his poetry is being celebrated all over the world.

The goal of Daniel’s Stafford Project is production of a CD, which will include 12 of Stafford’s poems, the formation of a band with four vocalists, three cellos, mandolin, banjo, piano and upright bass and the production of a video featuring the new group. The band will be touring in performing arts centers around the country. This production is being funded by a Kickstarter Crowdfunding Campaign.

The funding through Kickstarter ends July 31st. The goal is to raise $6000 by then.

The recording will take place both in Nashville, TN, and in Ashland, OR.

Daniel’s goal is to make great poetry available as a performance art in a fun, beautiful, entertaining setting that can be enjoyed by an audience of all ages.