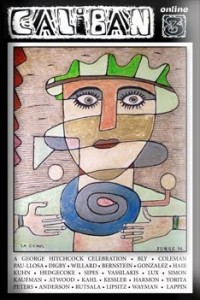 In the mid-80s, American politics and writing took a turn to the right. The great American tradition of innovative, imaginative writing, from Whitman and Dickinson through the giants of the 20th century, was overshadowed by an obsession with literary formalism. Lawrence R. Smith founded Caliban in 1986 to counter this tendency. Writers who flourished in George Hitchcock’s legendary kayak magazine, which closed in 1984, moved to Caliban: Raymond Carver, Robert Bly, Colette Inez, James Tate, W.S. Merwin, Michael McClure, Charles Simic, Diane Wakoski, Philip Levine, Louis Simpson, Russell Edson, and many others. Writers who had never published in kayak also joined the Caliban scene: William Burroughs, Maxine Hong Kingston, Jim Harrison, Wanda Coleman, Louise Erdrich, William Stafford, among a host of others. Caliban was an instant success, praised by Andrei Codrescu in a review of issues #1 and #2 on NPR’s “All Things Considered” and given a Coordinating Council of Little Magazines award for outstanding new magazine. The original Caliban was also awarded three National Endowment for the Arts grants in support of the publication costs of the magazine. The Bancroft Library of the University of California, Berkeley, purchased the Caliban archives in 1997.

In 2010, fourteen years after the physical magazine closed, Smith started an online version. It looks just like the old Caliban: it has the same design, format, and even the same typeface. You hear the sound of turning pages as you move through it in virtual space. As one artist remarked, “This is the way angels read.” In addition to the outstanding contributors that characterized the old magazine, the new Calibanonline features full color, high-resolution art reproductions throughout each issue, short art videos, and recordings of original musical compositions. In that sense, the new online version offers even more than the original.