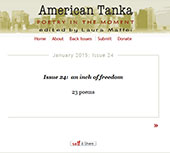 American Tanka is an online publication that “seeks to present a small selection of some of the most well-crafted English-language tanka being written today, in a visually calm space that allows the reader’s eye to focus on the single poem and linger in the moment it evokes.” Having begun as a print journal in 1996, Founder and Editor Laura Maffei produced the publication until 2008. After a two-year hiatus, Maffei brought the journal back online in the original one-poem-per-page format. American Tanka is published once or twice per year.