To celebrate my 75th year, I’ve published a new book of poems, and many of them are about the way in which we come together to help each other through the world. Here’s just one: 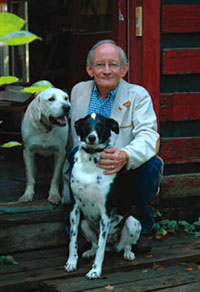 On a parking lot staircase
I met two fine-looking men
descending, both in slacks
and dress shirts, neckties
much alike, one of the men
in his sixties, the other
a good twenty years older,
unsteady on his polished shoes,
a son and his father, I knew
from their looks, the son with his
right hand on the handrail,
the father, left hand on the left,
and in the middle they were
holding hands, and when I neared,
they opened the simple gate
of their interwoven fingers
to let me pass, then reached out
for each other and continued on.

American Life in Poetry is made possible by The Poetry Foundation (www.poetryfoundation.org), publisher of Poetry magazine. It is also supported by the Department of English at the University of Nebraska-Lincoln. Poem copyright ©2012 by Ted Kooser from his most recent book of poems, Splitting an Order, Copper Canyon Press, 2014. Poem reprinted by permission of Ted Kooser and the publisher. Introduction copyright © 2014 by The Poetry Foundation. The introduction’s author, Ted Kooser, served as United States Poet Laureate Consultant in Poetry to the Library of Congress from 2004-2006. We do not accept unsolicited manuscripts.