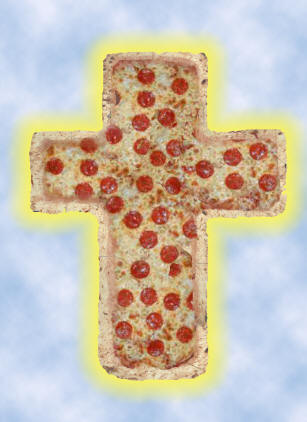 The Passion of the Crust: Uncle Frank Stays Home from the Movies

Have you seen Mel Gibson’s new movie? What’s the title… The Passion of the Crust? No, that’s the name I’m giving the pizza joint I’m opening soon. I’ve been a home-made pizza baker for decades. The secret to a good pizza is the crust, and the secret to the crust is the dough. The dough: It is risen! For Easter, we’ll be turning out pizzas in the shape of a cross.

Yes, the Passion of the Crust will be a parlor of miracles. Bring in a gallon of water and we’ll turn it to wine for you while you wait for your order, and with a handful of breadsticks feed the hungry multitudes. With sauce, all things are possible.

But back to the movies: The Passion of the Christ. That’s it, the one that gives happy viewers a chance to watch a gang of sadists beat the crap out of someone pretending to be Jesus for a couple of hours before killing him.

This is someone’s idea of a good time? Not mine. I was there in 12th grade history class when someone brought in the 8 x 10 glossies of Mussolini and pals, photos taken after Il Duce’s former subjects vented their frustrations on their erstwhile leader. Very glossy, very up-close. Uncle Frank wanted to hurl. There are some things I don’t want to see, including Mussolini’s battered carcass and Mel’s latest movie, even if I know, in the case of the movie, that all the bloody details are just make-up and special effects.

Food for Gore, and We Don’t Mean Al

What are we supposed to do, eat popcorn and Jujubes while savoring a long evening of mutilation?

“Hey, Honey, get me the bucket-sized popcorn, would you? With extra butter? Torture always makes me hungry.”

Saddam Hussein was the same way. Especially when the festivities took place outside. Outdoor air stimulates the appetite when the blood starts to fly.

So I’ll skip the movie. The TV trailers have been sufficient to slake my taste for blood. I think I’ll stay home and watch something on Animal Planet.

My aversion to this sacred carnage is clearly in the minority. Entire churches are arranging special showings of the film for faithful Christians seeking just a closer walk with Thee. Sorry, with Him. They’re a-thirsting to bathe in the Blood o’ the Lamb; they’re up for the vicarious misery of the Stations o’ the Cross, keen on the Crown o’ Thorns, ready to shed a tear for the precious heavenly Son o’ God, wracked and torn in his extremities, and everywhere else.

This is, I believe, the kind of phenomenon that led to that useful exhortation, “Get a life.”

Jesus, and I say that in apostrophe*, what a bunch of credulous doofuses we Americans are. We’re so overstuffed with grade-school religiosity that it oozes out our pores. We’re bloated with literalistic biblical twaddle; awash in superstitious flapdoodle; always eager to sign away our rational faculties for the promise of a harp and a cloud in the eternal firmament. How else is it possible to explain why that well-known nitwit, Pat (the Reverend) Robertson—who is on record as supporting the enlightened belief that dinosaurs and human beings once cohabited on the planet—appeared on the Fox network to offer his “thoughts” on Gibson’s film? How else is it possible to explain why NPR threw away valuable airtime on a lengthy discussion of this dumb flick?

Hello out there: It’s a movie, fer chrissake. A movie! A length of film replicated many, many times to be shown systematically around the country for the explicit purpose of making money. That’s m-o-n-e-y. Do you think Mel is going to donate his profits to the Little Sisters of Misery’s annual pancake breakfast fund? With maybe some left over for the Lutheran Ladies’ Aide Thanksgiving mitten drive?

Not a Trace of Doubt in Their Minds

According to 2001 Gallup polling, 45 percent of Americans consider themselves “born again.” In the same poll,  an astounding 63  percent of respondents  believe that religion can answer all or most of today’s problems. A like number, 63 percent, said that religion currently has too little presence in public schools.  But wait, there’s more:

All of these beliefs are beyond testing. That’s what makes them “beliefs,” rather than knowledge. Like religious adherents in general, most Americans don’t want to know: They want to believe. And they do, regardless of anything resembling rational argument.

He’s Watching You, Too

So here we are, Jesus fans: drifting through the endless maw of space, the rest of the universe rushing away from us at ever-increasing speed (for good reason, no doubt); convinced, believing, persuaded, that God in Heaven is so wonderfully interested in our inane, witless doings that He keeps His lidless eye trained on us, unblinking, even when we go to the bathroom. (Don’t bother to shut the door. It won’t help.) He’s always watching! He cares! The Good Lord won’t give you anything you can’t handle!

Never mind that a tidal wave can wash a couple of hundred thousand innocent schmucks out to sea, as happened in the former East Pakistan in 1970, as though they were no more than sand fleas on a beach. Of course, they weren’t Christians, most of them; had they seen the Light o’ the World in time, God would no doubt have distributed life preservers. Or maybe would have directed the ocean’s force against some more deserving nation of pagan losers. God’s eye is on the sparrow, and on you, too! Be not afraid! All ya gots to do isbelieve, brothers and sisters!

Uncle Frank does. He believes we’re so afraid of what we don’t know that we’ll concoct and subscribe to any crackpot, untestable religious fantasy as long as it promises us an out, and gives us an excuse not to work for the truth.  He believes that humanity made God in its image: vain, jealous, petulant, violent, vindictive, arbitrary, cruel and irrational. That’s us. That’s our God. And “Christians” have made Jesus this sweet deity’s personal agent. 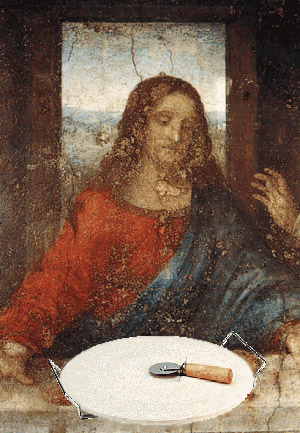 Look at America’s true believers: making public policy in accord with religious principles; restricting on the grounds of supernatural dogma medical science—stem cell research, for example—that unfettered could hasten improved therapy for and prevention of a raft of hideous diseases; ranting and raving about the terrible threat of homosexual marriage on the basis of biblical interpretation; carrying on like lunatics over “liberal” judges’ “taking God out of the public schools”; trying to give an idiotic pseudo-science, creationism, equal time with the study of scientific evolution in high school biology classes; with their peculiar notion of God on their side, aspiring to deny  women the right to control what happens to their own bodies.

And sniffing in disdain at the Taliban and other fundamentalist Muslims who base their laws on twisted interpretations of the Koran, and, with God as their co-pilot, fly hijacked airliners into tall buildings. Geez, what a buncha heathens. Meanwhile, religiously rapt Americans line up to wallow in Filmmeister Mel’s exercise in sadistic piety.

*Apostrophe: The direct address of an imaginary person.