New Lit on the Block :: NAP 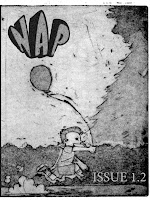 Habitus: A Diaspora Journal has created its first digital publication — a collection of some of the best writing from their first six print issues. Readers can purchase a copy as a DRM-free ePub, readable on the device of your choice supporting that format, or visit Amazon to get a copy formatted for Kindles. An iPad edition should be available soon in the iBookstore.

Edward Champion's The Bat Segundo Show is a cultural and literary podcast that involves very thorough long-form interviews with contemporary authors and other assorted artists. Standard questions that have been asked of guests over and over are avoided, whenever possible. The show is updated (ideally) every week and sometimes every two weeks. There are at least five podcasts unveiled to the listening public every month and, more often than not, considerably more. Currently, there are nearly 400 shows available, with a full index of guests.

Published April 05, 2011
New Orleans Review has announced the 2010 Walker Percy Fiction Contest winner, runner-up, honorable mentions, and finalists. The final judge was Nancy Lemann. The winning story and the runner-up will be published in the next print issue of the New Orleans Review.

Published April 05, 2011
32 Poems will feature five book recommendations (or an interview with a poet) for each day in April. Their goal is to share favorite poetry books with people and to promote the work of the recommending poet. Below is the month's schedule thus far:

Freedom in Harmony is Poetry Kanto editor Alan Botsford's blog "inspired by, but not limited to, events still unfolding in Japan."

Published April 06, 2011
Michigan Quarterly Review has announced the winners of its 2010 literary awards:

Shimon Tanaka has been awarded the Lawrence Foundation Prize for 2010. The prize is awarded annually by the Editorial Board of MQR to the author of the best short story published that year in the journal. Tanaka’s story, “Destruction Bay,” appeared in the Fall 2010 issue. The prize carries a cash award of $1000.

Albert Goldbarth is the recipient of the 2010 Laurence Goldstein Poetry Prize, which is awarded annually to the author of the best poem appearing that year in the Michigan Quarterly Review. His poem “Our Argument, like the Thunderstorm” appeared as part of a sequence of poems in the Winter 2010 issue.

Eric Lee is the second recipient of the new Page Davidson Clayton Prize for Emerging Poets, which is awarded annually to the best poet appearing in MQR who has not yet published a book. The award, which is determined by the MQR editors, is in the amount of $500. Eric Lee's poems “Getting Kicked out of Steamers Restaurant in Fairhope, Alabama” and “Kangaroo or Lion?” were published in the Summer 2010.

Published April 07, 2011
Heather Sappenfield of Vail, Colorado, has been selected as winner of the fifth annual Danahy Fiction Prize by the editors of Tampa Review. She will receive a cash award of $1,000 and her winning short story, “Indian Prayer,” will be published in Tampa Review 42, forthcoming in summer 2011.

The Danahy Fiction Prize is open to both new and widely published writers, with an annual postmark deadline of November 1. The $15 entry fee includes a one-year subscription to Tampa Review, and all entries submitted are considered for publication.

nanomajority is interested in the various ways in which artists, writers, and critics intersect (or don't), inviting "residents" to work on a project on the site for an extended period of time. In this way, nanomajority hopes to provide a flexible, unique space for projects to develop.

nanomajority has been featuring the women of ART364B in separate monthly installments. Current projects include works by Melissa Potter, Kate Clark, Jennifer Musawwir, Miriam Schaer, Marietta Davis, and Adriana Corona.
Page 131 of 432
back to top
Return to List