The poems in this issue of I-70 had a certain flow not always found in literary journals—or even single-author collections, for that matter. It is a feature made even more remarkable given that the work here is presented alphabetically by the author’s last name.

The poems in this issue of I-70 had a certain flow not always found in literary journals—or even single-author collections, for that matter. It is a feature made even more remarkable given that the work here is presented alphabetically by the author’s last name.

Could it have something to do with a regional sensibility? (A majority of I-70’s poets reside in or around Kansas City.) Maybe. Though probably not. While I’m certain these coincidences were not lost on the editors, it seems more to be a case of a journal coming together incredibly and inexplicably well.

I-70’s overarching unity, however, didn’t make itself known to me until later. I’ll admit I turned first to the poems whose titles stood out—leapt out, make that: “My Father Never Called Me By My Proper Name” (Stanley E. Banks), “Arlo and Trude Speak in Different Tenses” (Charles G. Reynard), “Jack’s Bumble Bee Tattoo” (Kevin Rabas), and “The Body Part” (Elizabeth Schultz).

I can’t help but read this way. And while sometimes there’s disappointment when a poem doesn’t seem to live up to its title, there was no such letdown here. Observe Banks, who manages to mix humor and heartbreak:

I asked him once why he called me Poppa Dad. I believed it was because he thought I was mature like a grown man even though I was only eight. He snapped back at me, “I call you Poppa Dad because you look like an old man with a big head and big ears.”

And Reynard, who presents two people—and two very different ways of dealing with the prospect of death. Here’s Arlo:

Aimed forward,
he cannot afford to worry
about such things. His glimpse back
at the hurtling years dizzies him,
cloudy vapors wither him.
For the ways we miss our lives
are life, according to the poet.
He must not miss his only her.

Rabas gives us Jack, whose “blue sketch / of a bee in the crotch / of his thumb” serves as a reminder “of who and where he once had been. // He pointed to the tattoo. / ‘I sting,’ he said. ‘I sting people / into truth.’ And Schultz both encapsulates and anticipates an internet (or, web) age where “fingers, anxious arachnids” hop-scotch on keyboards, “smell and taste numbed, / run, run, run programs / until it’s impossible to stand / waiting for the body part / to be downloaded on demand.”

But then there were the poems whose unassuming titles only served to heighten the sensation of delight and surprise in store. One such piece that snuck up quietly only to then smack me silly was Barber’s “Daylily Letter,” which should be read in full, but here’s a sample: “I rock / on the porch all evening, but you don’t come / with two fingers of scotch in a jam jar / across the street to me.”

Indeed. And how about Victor Contoski’s “Dark Post Office,” where:

Beyond the town
far out onto the prairie
you hear the ebony trucks of night
revving up their engines
like roaring lions
preparing their dark deliveries.

And then there is Bill Bauer’s “Yellow Dress,” a poem with one of the most phenomenal endings I’ve ever read:

Also enhancing this edition are a handful of fine photographs by editors Greg Field, Gary Lechliter, and Maryfrances Wagner, as well as sixteen curious and whimsical drawings—interspersed, it appears, at random on the same pages as some of the poems—by Philip Miller. An author photo and short tribute to Miller, who passed away in 2011, precede his three poems. The journal also showcases two contributors: Featured Poet William Trowbridge, with five poems, and 2011 Gary Gildner Poetry Award Winner Mark Wagenaar.
[www.i70review.fieldinfoserv.com/] 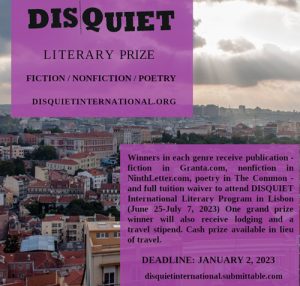 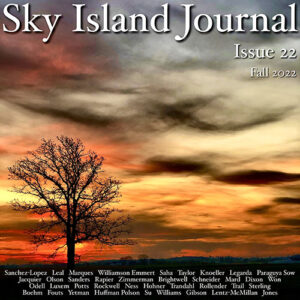 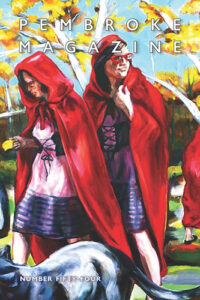 Review :: “Deathbed” by Anna B. Moore