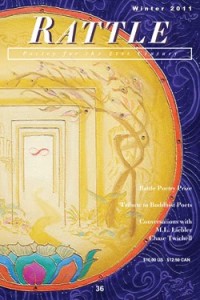 The Winter 2011 issue of RATTLE includes the finalists for the 2011 RATTLE Poetry Prize. The winner has not yet been selected, as RATTLE has opted to turn this final decision over to the magazine’s readership. Editors have carefully considered the best way to do this, and have opted to offer voting eligibility only to those who were already subscribing to RATTLE prior to the announcement of the finalists.

Even if you’re not a subscriber, it would be fun to pick up this issue (or have a class of students read it at the start of next semester) and go through your own selection process, then see how this compares with the final decision. The winner will be announced at RATTLE online on February 15, 2012.